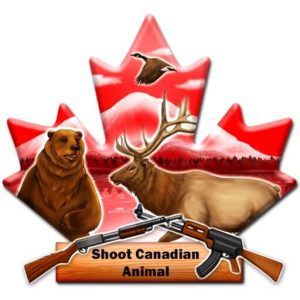 Canadian animals are advancing on your position and it is your job to defend it. Upgrade your weapons, defenses and call in artillery to defend your position. Play through 100 missions and see 28 different animals.

Animal Invasion is a Canadian themed shooting game with the goal of defending your position from cows, geese, wolverines and grizzly bears. These animals will attack your defenses and try to overthrow your position. It is your job to upgrade your defenses, shoot your weapons and call in artillery to repel the attacking animals.

Animal Invasion uses a physics simulation to replicate how the bullets tragectory. Players will tap and hold their finger on the screen to continuously shoot rounds at the invading animals. Each gun will have its own unique characteristics that affect the bullets trajectory. For example, the AK47 will have a high fire rate and bullet velocity allowing the rounds to shoot a far distance and kill the animals at a large range. On the other hand, the grenade launcher has a low velocity which greatly reduces its range. This is compensated by the grenade launcher shooting explosive rounds that deal extra damage upon impact. Each gun has its own strengths that will make it more effective at killing certain types animals.

There are 28 different animals in the game and all of them can be found in Canada. Initially, your position will be invaded by deer, owls and foxes. As the player progresses through the game they will encounter more feared animals like the bison, cougars and grizzly bears. High hit point animals like the cow and porcupine slowly advance on your position but take a lot of shots to kill them. Other animals like the wolverine, fox or wolf will sprint across the screen leaving the player with little time to react. Birds will fly across the screen at different heights, posing a new challenge of finding a weapon that can effectively shoot them.

In the game, players can upgrade their defenses and artillery to help repel the invaders attack. Sand bags and the net are the two types of defenses. The number of hit points they have determines how many animals need to attack the position to overrun it. Artillery is called in against strong waves of invaders and this will inflict serious damage to the attacking animals. There are 4 types of artillery: mortar, airstrike, machinegun fire and flak gun fire. Each artillery is designed to inflict extra damage on certain types of animals.

Download Animal Invasion and see how long you can hold your position against the invaders.