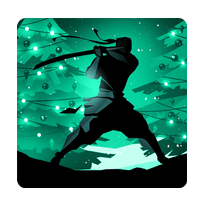 Shadow Fight 2 is a 2D fighting game that turns you into Shadow, a warrior who arms himself with loads of different weapons to try to defeat all the enemies in his path.

Throughout the Shadow Fight 2 adventure, you’ll encounter a variety of enemies, each with their own appearance, shape, and behavior. You’ll face aggressive opponents who will constantly attack you, as well as others who will be able to predict your mistakes.

Although you can fight barehanded with just your legs and fists, Shadow Fight 2 also allows you to purchase and use a variety of weapons and spells. When it comes to winning a battle, everything is fair game: swords, axes, truncheons, and fire spells.

Shadow Fight 2 APK’s battle system is quite different from that of most 2D fighting games. Use the directional joystick to control Shadow, your hero. You’ll also do different movements depending on where the joystick is when you press the attack button.