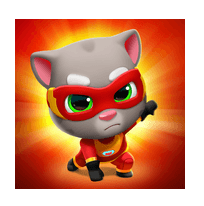 Talking Tom Hero Dash is an endless runner where you play the famous Tom, Angela, and friends to collect the greatest possible number of coins. All while you maneuver around the huge number of obstacles that appear in every level.

It’s important in Talking Tom Hero Dash to anticipate all of the obstacles that may appear in your path. You’ll even have to contend with raccoon gangs who will stop at nothing to stifle your progress. If you want to rebuild an increasingly desolate world, you’ll have to overthrow some boss raccoons.

Talking Tom Hero Dash has standard controls for a game of this type. To move in the desired direction, simply tap the screen on the left or right. Simply trace the movement with your finger to jump or crouch. In the air, you can even perform surprising pirouettes.